Polymer electrolyte membrane (PEM) electrolyzer is an electrochemical energy conversion device that converts water into hydrogen and oxygen. The hydrogen can then be stored and used for on-demand electricity generation with fuel cells. One challenge for PEM electrolyzers is the inhibition of liquid water flow within the porous gas diffusion layer (GDL), caused by the formation of oxygen bubbles. A detailed understanding of bubble formation, and detachment in the GDL of the electrolyzer can inform new material designs and consequently, improved performance.

MIE Doctoral Candidate, Faraz Arbabi, fabricated and used microfluidic platforms to visualize air bubble transport in two-dimensional (2D) representations of GDLs to gain insight into how the geometric features of the GDL impact multiphase flow in PEM electrolyzers. 2D porous networks were designed using volumetric pore space information obtained from micro-computed tomography (micro CT) visualizations. Microfluidic chips were fabricated to represent three common types of GDLs, and used to simulate the transfer of oxygen bubbles generated at the catalyst layer, through the GDL towards the flow channels. The results of this work indicated that the use of microfluidic platforms for evaluating PEM electrolyzer GDLs is highly promising. Faraz is currently developing a three-dimensional numerical tool to explore the effects of operational conditions of the electrolyzers, as well as micro-structure properties of the GDLs on the oxygen transport.

Small molecule organic photovoltaics (OPVs) have received significant interest over the past few years with power conversion efficiencies now reaching ∼12%.  In order to further increase efficiencies, new materials, electrodes, and structures are being investigated in the hope of competing with existing solar-energy-harvesting technologies while also reducing costs, thus making solar cells economical for the average consumer.  Chem-Eng and MSE doctoral candidate, Jeffrey Castrucci, and collaborator Nicola Beaumont, from University of Warwick, United Kingdom, explore the use of the material boron subphthalocyanine chloride (Cl-BsubPc) and a chlorinated derivative (hexachloro boron subphthalocyanine chloride, Cl–Cl6BsubPc) to act as electron-accepting materials and as replacements for C60, when coupled with tetracene and pentacene as the electron-donor materials in organic photovoltaics (OPVs). A large decrease in photocurrent was observed when C60 was replaced in the pentacene OPVs, although there was evidence of the harvesting of triplet excited molecules for the pentacene/Cl–Cl6BsubPc OPVs.  The harvesting of triplets is a process rarely taken advantage of in OPVs, so identifying a material other than C60 that takes advantage of this process opens new approaches to improve efficiency.  Large increases in voltage and stability were also observed.

MSE PhD candidate, Han Gao, studies the prospects of new materials for use in flexible supercapacitors, electrochemical energy storage devices with numerous applications including personal electronics and storage solutions for energy harvest. Under the supervision of Professor Keryn Lian, his work is currently focused on the use of composite materials for solid polymer electrolytes. His 2014 ISE Outstanding Energy Paper studies the effects of nano-SiO2 and nano-TiO2 fillers on a thin film silicotungstic acid (SiWA)-H3PO4-poly(vinyl alcohol) (PVA) proton conducting polymer electrolyte with respect to their proton conductivity, environmental stability, and dielectric properties. Three major effects of these fillers have been identified: (a) barrier effect; (b) intrinsic dielectric constant effect; and (c) water retention effect. Dielectric analyses were used to differentiate these effects on polymer electrolyte-enabled capacitors. Capacitor performance was correlated to electrolyte properties through dielectric constant and dielectric loss spectra. Using a single-ion approach, proton density and proton mobility of each polymer electrolyte were derived as a function of temperature. The results allow the authors to deconvolute the different contributions to proton conductivity in SiWA-H3PO4-PVA-based electrolytes, especially in terms of the effects of fillers on the dynamic equilibrium of free protons and protonated water in the electrolytes. 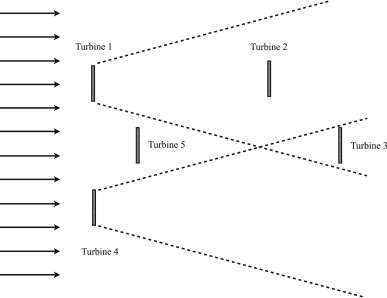 Wind energy, one of the fastest growing forms of electricity generation in the world, is produced by turbines that are often placed in close proximity to each other in a wind farm. The energy output of a wind farm is proportional to the number of turbines present. However, the exact placement or layout of the turbines has a large impact on total energy production.  MIE doctoral candidate, Sarina Turner, works to develop new mathematical programming approaches for wind farm layout optimization. Using Jensen’s wake decay model to represent multi-turbine wake effects, she works to develop mixed integer linear and quadratic optimization formulations that can be applied to several example wind farm layout cases. Compared to previous approaches, the models produce layouts that tend to be more symmetric and that generate slightly more power. The formulations solve quickly, allowing a decision maker to efficiently explore the impact of different turbine densities in a wind farm.

In the transportation sector over 97% of energy use can be attributed to petroleum.  As the automobile industry explores bioenergy as an alternative supply, the comparative advantages of liquid biofuel (lignocellulosic fuels) and bioelectricity demand greater attention.  Lead-author Jason Luk (Civil), a PhD candidate, in Prof. Heather MacLean’s research group employs a life-cycle analysis modelling well-to-pump, pump-to-wheel, and vehicle cycle stages for a range of vehicles including Hybrid Electric, Plug-in Hybrid, Battery Electric, and Conventional vehicles.  The study finds that while both biofuel and bioelectricity have comparable impact on GHG emissions, regional characteristics may still create conditions under which either may be superior. 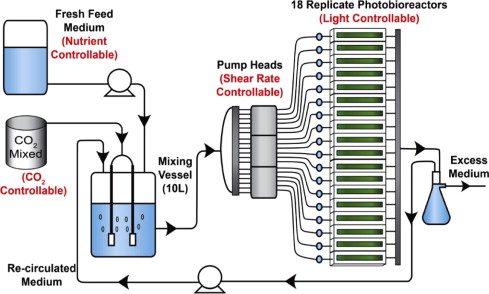 With rapid growth and dense lipid/oil concentrations biofuels derived from algae have seen a surge in interest as a viable biofuel stock, with numerous advantages over fuels derived from corn, soybean, and other plants.  Lead author Peter J. Schnurr, a graduate student in the Dept. of Chemical Engineering & Applied Chemistry working with Prof. Grant Allen and Prof. George Espie, has developed an algae biofilm growth system which allows him to study the growth kinetics and neutral lipid productivities of specific algae.  While the system further enables him to limit key nutrients to algal biofilms, the study shows this method of nutrient starvation is not an effective method of lipid production. The biofilm growth system does however demonstrate very favorable lipid productivities in comparison to conventional algae crops. 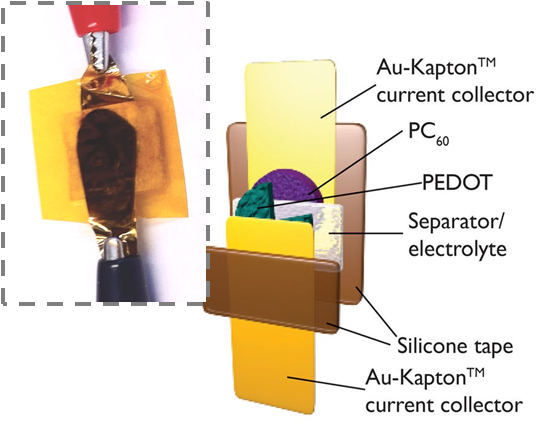 Battery-powered electronic devices have an increasingly large role in our day to day lives, and with this reliance comes a desire that batteries be smaller, recharge faster, and have a longer life-span.   By integrating batteries with supercapacitors (SC) we may be getting closer to the kinds of efficiencies we require.   Lead author Tyler Schonn (Chemistry), together with Paul DiCarmine and Prof. Dwight Seferos are looking at highly capacitive fullerene polymers to act as negative charge-accepting electrodes in a supercapacitor.  Most SC are limited to positive charge-accepting materials that are only stable in neutral or positively charged states thus diminishing the operating potential, energy and power of the device.  By enabling a negative charge-accepting material the study highlights the potential for supercapacitors to greatly increase their operating potential.

In North America, the most recognized certification program for green building is the Leadership in Energy and Environmental Design (LEED) rating system, now in its 3rd iteration.  While builders previously received single credits for design elements, regardless of cost or environmental impact, version 3 introduced a weighting to credits for certain design elements that achieved greater energy efficiency and CO2 reduction.  Lead author Sarina Turner (MIE), and Prof. Timothy Chan have taken an inverse optimization approach to study the effects of weighted credits and their impact on criticisms in versions 1 and 2 that builders ‘point chased’ by incorporating the easiest and cheapest design elements to meet minimum thresholds.  The study finds that builders have not placed equal value on all credits, particularly when factors such as cost, building type, size, and certification level play a role in how the credits are valued.